There has been much talk about Indian engine breathing on the mailing lists. Not the breathing the engines do through carburetter, valves and exhaust pipe, but the kind that goes on below the pistons; in & out through the crankcase breather valve. (There is a good article on general engine breathing here)

Discussion has been centered mostly on post war Chiefs, and there has been people reporting problems with gasket joints weeping (or in some cases spewing!) oil due to high pressure in the cases -caused, ultimately, by deficient case breathing.

The stock setup relies on a small disc in the breather assembly on the cam cover (on the Scouts it's in the oil pump). This disc is free to oscillate with pressure changes in the cases; sealing the engine when pistons go up and letting air pass through the breather pipe when pistons go down. This is supposed to maintain a positive pressure in the crankcases that will force oil up through the pushrod guides -but not too much oil, and not too much pressure in the cases.

The stock setup was modified for slow speed police duty by drilling a hole through this disc. The reasoning seems to have been that some air would be drawn in through the, otherwise closed, disc valve on the upwards movement of the pistons thus giving a higher crankcase pressure, and supplying the pushrod guides with oil at low speeds. Presumeably the city police used this valve while the highway patrols kept the stock, non-drilled, one.

For some reason many Indian riders today have the drilled disc in their engine. At today's higher traffic speed that often leads to excessive pressure in the crankcases -and to externally lubricated bikes & riders...

While fitting the ordinary solid disc is a start, the idea of using an automotive type PCV valve was mentioned, and Duff has made some prototypes of such a valve that is currently being tested. The idea is not so much to replace the stock breather arrangement as to help it cope with higher speeds than it was originally intented for.

It has been named the Moto Valve.

Here's the 3 main parts of the Moto Valve. The threaded part to the right in the picture screws into the timing plug hole, the middle part supports the disc (stock Indian breather disc. Not shown) while the bronze part to the left directs the new breather pipe (not shown) down & back.

Currently 2 Chiefs are racking up test miles, and a Four is being fitted with a prototype Moto Valve too. Test results will decide if the Moto Valve is a real improvement for Indians, and a positive outcome will probably mean that Moto Valves will be offered for sale soon. Stay tuned!


Below is Duff's fitting instructions to one of the "test pilots" for the prototypes. 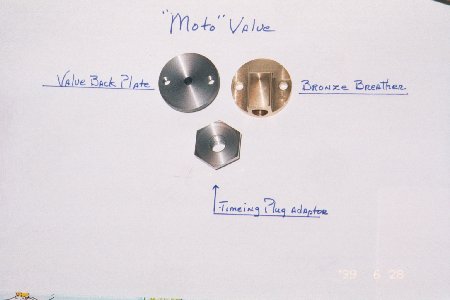 The vent works like this: The hex timeing plug goes in place of original, the bronze breather is best mounted at about 8:00 so you may route a line around the drive shaft casting. You may vent to the underside of motor or rear chain as I have done. The disc is same as Indian uses as I use the same venting idea as the factory has done. Except you have two vents one on each side of motor. I supply you with two valve plates with two different hole sizes in them, one is .290" the other is .390", for test purposes as I want to see which is best size to run with. The .390" is about the same as the drilled disc the cam case cover as now. Thats about it, I'll send a drawing to help you out with line routing and explain the valve assembly. It looks very much like Indian factory part so many people will not notice the valve in place.

The heat of summer is finally subsided. Time for some nice cool rides
now. All through the heat of summer my Chief has kept its cool and has
all but ceased to be a spot marker. The only drips now are the blow by
from the tank and me for not cyphered that out yet. Maybe there is a fix
some one with like problems has arrived on.


Tried the valve last night, the pushrod guides look like they stopped leaking ,
but it was late so I really couldn't see that well. However, no venting can
take care of the leaks at the base gaskets. I think they are blown. I am
going to look at the valves tonight and see if they are getting enough oil,
also adjusting them as I have well over 2000 miles now. I used the larger of
the 2 vents. Speak to you on tuesday, I have a ride on sat where we are going
about 250 to 300 miles, good test for the vent, bad test for my body. Not
complaining on a smooth road (as if you could find one in the east) as the
chief feels great on these, but hit a hole and your spleen takes a holiday.
Well thanks again,and will report back soon . DD46CHIEF
ableanodizing@worldnet.att.net

>Doug
>
>  Yes remove the bronze piece and solder 3/8" tubing to whatever
>length you want, I went with a slight curve around the driveshaft
>casting on the cases and then to my rear chain just past the chain
>guard. I made up some trannie bolts with a clip for the 3/8" breather
>line cause I don't like to hang that much weight without support. If
>you want I will send a bolt with a clip on it. Thanks for testing the
>valve out for me!
>
>Duff


My '48 Chief likes to mark his spot. Due to sitting for extended
periods, a sniffle becomes a slobber.Especialy around the side stand.
Earlier this summer I installed the Moto-Valve as per Duff's
instructions. Judging by the amount of oil I was a paintin' my floor ,
or others, I opted for the larger  of the two plates. I have virtualy
eliminated the case leak problem, and am sure the chain appreciates the
lube it now gets. I don't mind a small bit o' oil on the floor but gaw
3-4-5 oz . Not a problem any more.


Back to Archives   Back to New Parts Page