By their nature, old motocycle parts are often found in a state of decay. However there is much that can be done to bring them back to service. Rusty steel parts is something we all encounter, and have ways of dealing with (from abrasive blasting to sandpaper & elbow grease), and this page is for collecting info on how everybody de-rusts, and how good the various methods work. More rust info will be posted on this page as it flows in, so check back once in a while (or subscribe to the VI mailing list to be sure you're informed of updates!).

If you have any information to add, or questions, please write me. Thanks!

On this page:
"Molasses" How to remove rust with horse food & acid...
"Freezer" Cool (sorry!) derusting container & table salt tip (we like food stuff on the VI...)

Other related pages on the VI website: (use your browser's "back" button to get back here!)
Comments on the info on this page  -Coming soon
VI Tech Tips; various sections. -Coming soon

Fill in form and "send" to submit your comments! (I'll post them here asap)
Again; these pages were written for a monitor resolution of 800 x 600, so if you use another and things look odd, you might want to try this.


Here's a little conversation on molasses from the VI mailing list (the postings read from the top down):

Speaking of rust, I have just been playing with using Molasses as a de-rusting agent on an old mudguard (fender). Works brilliantly - eats the rust, and leaves bare shiny steel. 1 part molasses + 3 or 4 parts water. Takes a day or two, so is nice and controlled. Molasses is 4 gals for $7 here in Australia. You need to use de-oxidene (phosphoric acid; ask any panelbeater) afterwards, because it starts rusting again almost immediately.. Spraypainters use this stuff immediately before painting any bare steel, stops the rust from getting a foothold under the paint.  I'm going to try de-rusting a petrol tank with it next, and if it works ok will try cleaning out my Indian tank with it - fingers crossed !! Rohan

Hi guys (and Gals), Try just using the phosphoric acid on its own, it is a perfect rust remover. I use it for de nodulising the inside of water pipes at my steel mill. Tony

Yes, phosphoric acid works extremely well too. But here it costs about $20 per gal. When Molasses is $1-50 per gal...... and seems to last forever ? Anyone know the active ingredient? Both undiluted prices. Takes a lot to fill a 44 gal drum !!! (object should be fully submerged, or corrodes above the waterline). Rohan.

For the molasses/water rust removal to work best it should be kept in a warm area and mixed or stirred up weekly. This worked for me when I had a generator that was beyond recognition. The area you store to "receipt" should be down wind. Ed

Do the pieces being cleaned need to be degreased first or will molasses
disolve grease also (asks lazy me)? Rob

Rob, I think molasses has very limited grease dissolving powers - no such thing as a free lunch!! (bet horses don't say that..) Rohan. 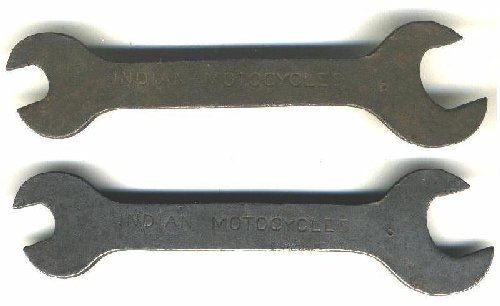 This is a before and after view of a spanner that was soaked in molasses overnight. And then given an immediate slosh in phosphoric acid. This prevents further corrosion, which starts to occur almost immediately. All the surface rust has been removed, although a few minor deeper marks with some rust remain. An inspection of the item part-way through the process showed some form of black finish partly remaining on the spanner - paint, or parkerising ? The scan doesn't quite show it, but the parkerising remains. Rohan 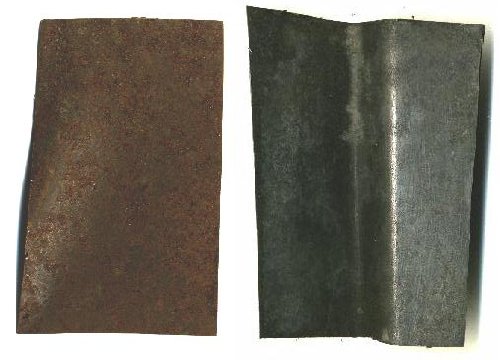 This is a before-and-after shot of the inside of a petrol tank. (sort of). These pieces have been cut out of the base of a Royal Enfield petrol tank (gas tank), to allow some serious dent removal. Left is as removed, and right one is after an overnight soak in molasses. And then a slosh in phosphoric acid, or it would very rapidly rust again. The two bits shown were very similar in condition before treatment, and show the actual surface which is inside the petrol tank. I'm very impressed, this is a lot better than putting in a handful of nuts and bolts and shaking (and denting your tank from the inside, irreparably....!!!) Rohan

Back to top of page

On rust removal, one idea is to get a freezer chest, (remove the mechanical guts) and coat the inside with fibrtglass or epoxy - viola! (I'm multi-lingual !) a close-able container to permanently hold the derusting concoction of your choice, that's big enuff to hold fenders and car doors.... Also (I think its been here) table salt in water with DC battery charger to derust parts - works good. Guy

Back to top of page
Back to Archives