Another neat idea to cut down on "external lubrication". This one is from Ed Glasgow of Indian hex head bolt fame. Click here to go to Ed's Indian Bolt Page. 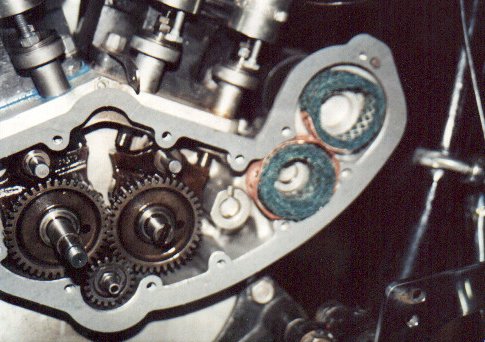 Here is a picture of a "filter" I installed on my 53 Chief which along with a different a breather disc from a HD Sportster. They have almost eliminated the oil consumption out of the breather. It acts like an air dryer in a large air compressor. The idea was first mentioned to me by Charlie Mahoney from Campbellford, Ontario.

The green media is out of a late 1950 Ford Truck oil breather "filter." The outer rings are copper with several holes drilled and the outside narrow in places than the depth of the cavity. The inside wire mesh is from the original Ford product. The original filter was cut in half, so with one filter you can make two to fit the Indian.

The HD breather valve was inset where the normal breather valve was. This was done at the same time as the "filters." There has been some controversy about using this valve and eliminating pressure in the crank case. Something to do with mist lubricating the valve push rods I think. Mine has been in for at least two years and 3000 to 4000 miles, which is not much for a test. The bike should come apart to be checked.  At the same time I put in valve rotators to try to extend valve jobs which I was having a problem with (poor seating valves and worn valve seats) after 5000 miles. 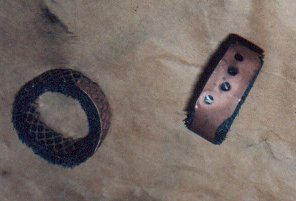 Here is two pictures of the filters and the HD valve. It is HD part # 24634-77 and I believe is from a Sportster, probably a 1977. Was told this was the only year this valve was used in the HD PCV system.  The valve is real similar to a check valve in a vacuum type fuel pump. I took a few pumps apart looking for some the correct size but failed in that attempt. The valve is spring loaded so you have a positive seal when there is pressure against it and minimal pressure will open the valve. 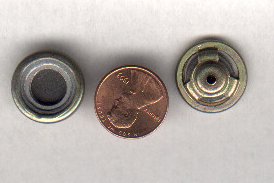 To install the valve you must grind out the original breather valve body. I used a dremel tool, you must be careful, for the to valve fit, you must almost grind thru the body. I did this also but a little solder solved the problem. If you file/grind some material off the face of the HD valve you will not have to grind as much out of the body which will also lessen the chance to grind thru. Install the valve in the body with a little silicone sealer on the outer diameter of the valve to seal between the valve and body then a small amount on the body instead of a gasket.

When this is installed on the bike you have no idea the original Indian disc is not installed.